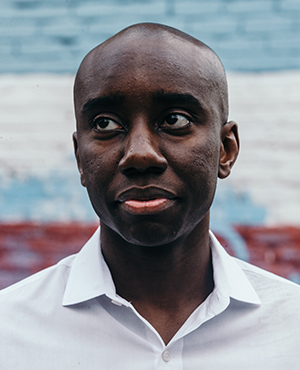 Adem Bunkeddeko '05, a candidate in the New York Democratic primary for the ninth congressional district, delivered a Stephen Crane Lecture to members of the the Pennington community on Tuesday, January 30.

Bunkeddeko launched a campaign to run for Congress in October 2017. The Democratic primary, in which he is runnning, will be in June 2018; he is running against incumbent Rep. Yvette Clarke. Through a career in public service, Bunkeddeko has tried to pay forward the sacrifices his family made for him growing up.

Beginning as a grassroots organizer, Bunkeddeko knocked on doors and collected petitions for candidates and causes that made a difference in the lives of working families in Flatbush. As a leadership fellow at the Bedford Stuyvesant Restoration Corporation, he helped create a support network to improve the educational and social outcomes of low-income families in Central Brooklyn. Working at the Empire State Development Corporation, he managed public-private partnerships designed to revitalize underserved communities throughout Brooklyn.

For the last five years, Bunkeddeko has served on Brooklyn Community Board #8 (Prospect Heights, Crown Heights, and Weeksville) and until recently was the associate director for business initiatives at Brooklyn Community Services (BCS). At BCS, Bunkeddeko helped create job training programs that provided Brooklyn residents with the skills to take advantage of meaningful employment opportunities.

Bunkeddeko is a longtime resident of Crown Heights. His parents are former refugees who fled Uganda's turbulent civil war to seek sanctuary and opportunity in the United States. They settled down and successfully reared their children in a modest one-bedroom apartment. Bunkeddeko's parents turned what had been a nightmare in Uganda into their version of the American dream.

A product of the New York City public school system, Bunkeddeko was fortunate enough to earn scholarships to attend both boarding school at Pennington and college. He is one of the first members of his family to graduate from college and earn a graduate degree. After attending The Pennington School, he received a B.A. from Haverford College, where he studied political science and philosophy, and an M.B.A. from Harvard Business School.