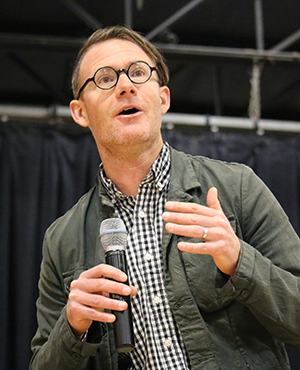 Author, entrepreneur, and activist Jonathan Mooney delivered a presentation about learning differences to the Pennington School community on Monday, April 9. Mooney did not learn to read until he was twelve years old, an experience that empowered him to share positive insight about learning disabilities.

Mooney, who is dyslexic, graduated from Brown University with an honors degree in English. A recipient of the Truman Fellowship for graduate study in creative writing and disability studies, he is the author of "The Short Bus" and co-author of "Learning Outside the Lines."

During his presentation at Pennington, Mooney talked about his experiences growing up and attending school with a learning difference. He said many did not believe he would achieve success, and he was even told at one point that he would "flip burgers for a living" or be incarcerated. "Instead of becoming an inmate, I became an advocate," Mooney said.

Mooney discussed his journey from dropping out of sixth grade in frustration to eventually earning an Ivy League diploma. He noted that students who learn differently are not intrinsically "disabled"; rather, the disability is created by the way these students are treated in school. "The good student does not equal the compliant student," he said. "Build a life on your interests and talents."

Mooney cited research indicating the frequent correlation between learning differences and creativity and entrepreneurship. He reminded the audience that all students and individuals are different in their own way, saying that people should celebrate their differences and find a way of learning that works for them.

For more information about Mooney, visit his website here.