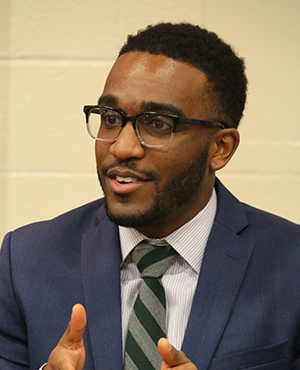 Nyle Fort is a minister, organizer, and scholar. He received a B.A. in English from Morehouse College, a Masters of Divinity from Princeton Theological Seminary, and is currently working on his Ph.D. in Religion and African American Studies at Princeton University. Fort has worked in the fields of education, criminal justice, and youth development, and as an activist committed to global transformative justice, he brings his national experience and international lens to his local work. Fort traveled to Ferguson, Missouri to help build the Movement for Black Lives. Upon his return home, he created 7 Last Words: Strange Fruit Speaks, a liturgy commemorating the last words of black people killed by police and vigilantes. He also established Newark Books and Breakfast, a monthly program providing free books and breakfast to local youth and families. Fort has traveled to Amsterdam as part of the International Fellowship of Reconciliation’s multinational effort to connect freedom struggles and challenge racialized violence, and he was invited to join 300 grassroots leaders from around the globe to participate in the Vatican’s III World Meeting of Popular Movements, a joint initiative of the Pope Francis and Pontifical Council for Justice and Peace. Fort is a frequent speaker at academic, cultural, and religious institutions and has spoken at Harvard University, University of Amsterdam, the Malcolm X and Betty Shabazz Center, and the historic Riverside Church. His writings have been featured in several academic presses including Harvard Journal of African American Public Policy and Socialism and Democracy as well as in various media outlets including The Guardian, The Huffington Post, The Root, and more.