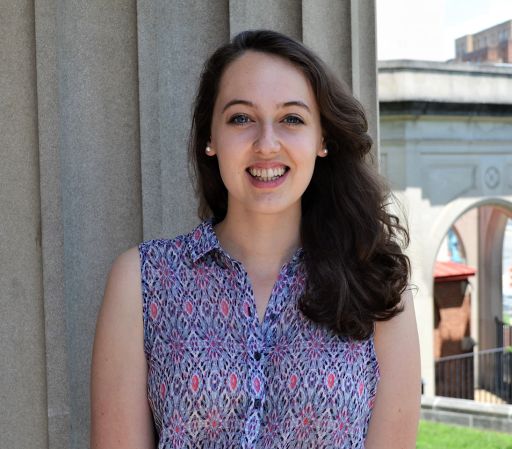 Anna Leader, teacher of French and English, is a creative wunderkind. Not only has she won Luxembourg's national literary contest for young authors three times, but her literary translation work has garnered numerous prizes. Most recently, Luxembourg’s national theater commissioned Leader to write a play about the coronavirus pandemic. Her play, Deliver Us, debuted at the Grand Théâtre de Luxembourg in early October to a live, physically-distanced audience.

Deliver Us features a series of conversations between delivery nurses and women going into labor. The play contains three timelines, each set in a unique moment of crisis: 2020, 1962, and 1918. In 2020, a millennial agonizes over the consequences of having a baby amidst the COVID-19 pandemic, economic collapse, and climate change. In 1962, a housewife gives birth under the cloud of impending nuclear war. And in 1918, an unmarried woman faces her own mortality as she goes into labor while fighting the Spanish flu.

With COVID-19 as the cornerstone of Deliver Us, Leader articulates the anxieties of the current era while gracefully drawing parallels between other crises of the past century. The Spanish flu serves as a natural analogue, but Leader also seeks subtler historical connections. A conversation with her grandmother, who gave birth to Leader’s father in 1964, inspired the play’s third timeline.

“She told me how stressful it was to give birth during the Cold War. I hadn’t even thought about that. Nothing happened, there was no huge nuclear crisis, so we forget about it,” said Leader. “But imagine having a shelter in your garden, really thinking the world is going to end, and you’re pregnant. That felt like an existential crisis.”

The backward progression through the play’s three timelines illuminates both the social progress and the intensifying anxieties of the last century. “The existential crises are getting bigger and worse. They don’t just threaten humanity, they threaten the fate of the entire planet,” said Leader. She added that quality of life has improved for many people since 1918. “A woman now can do a ton of things that a woman in 1918 couldn’t do,” she said, also citing the fall in worldwide infant mortality rates since the early 1900s. “There have been a lot of improvements. But the overlying existential terror has escalated.”

Leader, who was born in the United States and raised in Luxembourg, has written since childhood, and she has penned a number of award-winning poems, plays, and novels. Despite her literary accolades, teaching remains Leader’s primary focus and passion.

“I learn so much from teaching. Preparing a lesson and diving deep into a text or its context, I find it so exciting,” said Leader, who studied comparative literature at Princeton University. “Teaching gives you a chance to get everyone’s input and everyone’s views on life, and I think that’s so important. And it’s emotionally engaging too because you’re handling so many different students’ needs. There’s nothing that replaces that.”

Nevertheless, Leader has contributed her artistic talent to the collective digestion of the past year’s global events. Birth is an especially potent theme when set against the backdrop of historical moments marked by fear. Faced with disaster of a grand scale, the women in labor in Deliver Us look to their nurses for assurance and distraction, but empty words in 1918 prove just as empty in 2020. Birth, however, is an inherently optimistic act. Ultimately, there is nothing more powerful than the cry of new life breaking forth into an uncertain world.