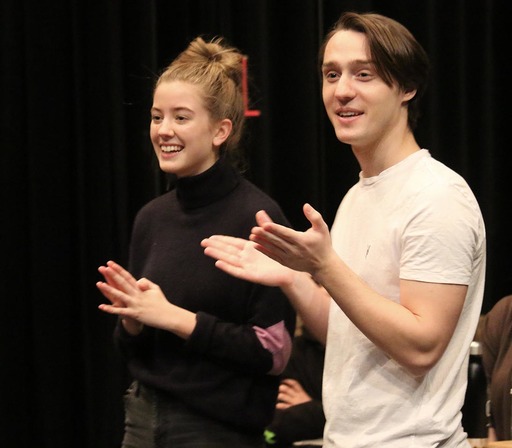 Michael Lee Brown, a Broadway actor and 2011 graduate of The Pennington School, returned to his alma mater on Friday, January 31, to host an acting and dance workshop for drama students. He also brought his co-star, Mallory Bechtel, who performed alongside Brown in the smash hit Dear Evan Hansen in New York City.

Brown performed each week for the past three years as an understudy and as the alternate actor in the title role of Evan Hansen in the six-time Tony Award and GRAMMY-winning musical Dear Evan Hansen on Broadway. In addition to playing the title role, he covered the other two male principal characters (Connor and Jared). Michael Lee Brown is the first person ever to have performed all three roles on Broadway. He finished his long run in the musical in November 2019.

Bechtel made her Broadway debut as Zoe Murphy in Dear Evan Hansen on July 31, 2018—shortly after she graduated from high school. She played that role until July 2019. Bechtel has also appeared in the A24 hit Hereditary and was a guest star in episodes of Law & Order and FBI: Most Wanted.

During the Pennington School workshop, Brown and Bechtel taught students the music and choreography of the song "Sincerely, Me" from Dear Evan Hansen. Students had the chance to ask questions and practice with the two special guests. After students learned their new routine, Brown and Bechtel then worked with the cast and crew on the School's winter musical, Urinetown.

For aspiring performers, Brown had the following advice: "If you truly love it, keep at it. Own your strengths while working on what you feel are your weaknesses. Performing is just as solid as a career choice as any other, so if you really want to do it, just do it."

Brown also credits the lessons he learned at The Pennington School when he thinks about his journey and his success on the stage.

"At The Pennington School, I learned the importance of being a good person and following your own path," Brown said. "I think that in doing both these things, I was able to achieve my lifelong dream of being on Broadway."