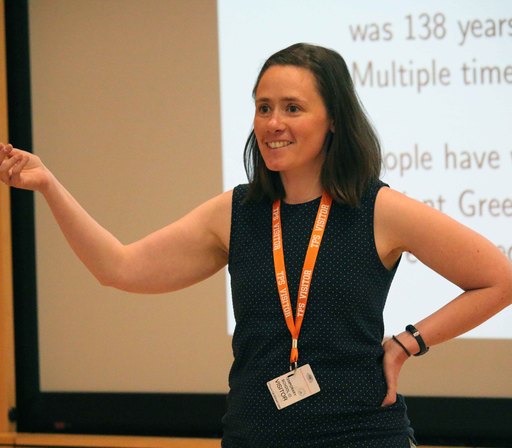 Ellen Eischen, a mathematician and a 1998 graduate of The Pennington School, spoke to Applied Science students on September 13 to address what keeps number theory flourishing across millennia and vast changes in cultures.

Number theory, which dates back to ancient Greece, is the branch of mathematics that deals with the properties and relationships of numbers. However, many people do not realize that this theory can have significant applications. Eischen began by briefly describing her classes and activities while she was at Pennington and then continued her presentation by explaining the educational path that took her to study mathematics. Currently, she works as a number theorist, researcher, and professor at the University of Oregon. In 2018, she received the National Science Foundation's CAREER award, one of the Foundation's "most prestigious awards in support of early-career faculty who have the potential to serve as academic role models in research and education and to lead advances in the mission of their department or organization."

In Eischen's interactive presentation, she passed around a belt with a complex number-to-letter code created with the concept of number theory. She encouraged students to try to crack the code and many were fixated on solving the problem! She also explained that a week in her life normally consists of: trying (and often failing) to discover new mathematics; figuring how to communicate complex mathematical concepts to other mathematicians and the public; traveling to speak about her research; teaching classes and mentoring students; serving on national committees concerning her profession; working to increase representation of women in mathematics; and, more recently, collaborating with the art museum on the University of Oregon's campus to show broad audiences the beauty of math.

She ended the lecture explaining the applications for keeping messages secret using math. She stated that modern cryptography relies on difficulty factoring large numbers and generalizations. Using a basic recipe, but leaving out one key part of information, makes it nearly impossible for someone to crack the code!

At the end of the presentation, the audience was eager to learn more from a fellow member of the Pennington community, and Eischen was delighted to answer questions and keep the discussion going with several interested students.