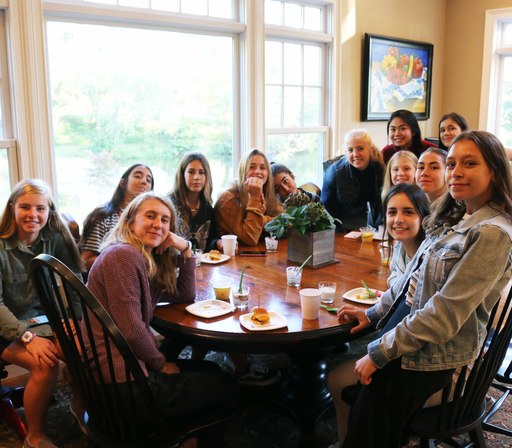 In March 2019, fifteen Pennington students traveled to Spain to complete a two-week exchange with our sister school in Madrid, Jesus Maria School. Students were matched with a host student and family in Madrid, who greeted them on arrival. This visit began an incredible adventure exploring the life and culture of Spain, using the Spanish language to communicate.

From September 9 to 21, Pennington students and their families then had the chance to host the Spanish students in their own homes in the United States. The group of sophomores, juniors, and seniors from Spain immersed themselves in American culture, practicing the English language at every opportunity they could. The students took day trips together to New York City and Philadelphia; attended a Broadway show; visited the Statue of Liberty; went to classes with Pennington students; and participated in family gatherings.

For Spanish exchange student Jaime Vidal, picking one favorite memory from his time in America was simply too hard. However, one moment that stood out was when he visited New York for the first time. He said, "It was impressive. I was in shock! When I went to the Empire State Building, I thought, 'I have the best city in the world just under my feet.'"

When the students were in New York City, they also saw the Broadway musical Dear Evan Hansen with Pennington alumnus Michael Lee Brown '11 in the title role. Vidal said he was very proud that he had spent time at Pennington, knowing that the star of the show was an alumnus of the School.

During the school day, Pennington students and their guests participated in classroom discussions and activities together. On September 19, the exchange students visited a Middle School Spanish class and, in small groups, shared some background information about themselves. The Pennington students then wrote a paragraph about their new friends and introduced them to the class in Spanish.

The exchange students were also able to tour The Pennington School's campus and experience life at the School. Vidal said, "When I came to [Pennington] and I saw all the students, the size of the School, and all the fields, it was like being in a movie. I have only seen a school like this in the movies or on television!"

The exchange program between The Pennington School and the Jesus Maria School in Madrid is an enriching way for students to experience another country's culture, practice a foreign language, and visit historic monuments and locations significant to the other nation.