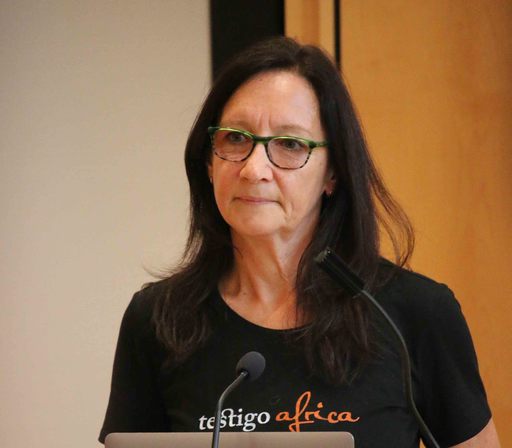 On Friday, November 15, the Global Studies Speaker Series welcomed Tracey Sawyer, founder of Testigo Africa in Tanzania. Sawyer worked in the corporate world for twenty years before visiting Tanzania on vacation. On her trip, she met a Masai chief who invited her back to the country for a special ceremony. During her return visit, she connected with a woman who later became her best friend. Her friend told her about some of the sustainability problems her village was facing and asked Sawyer for help. Sawyer quickly said yes, thinking that she could enlist other nonprofits to help. That proved much harder than she expected, so she developed and implemented a smaller-scale water project herself, raised money, and started her charity, Testigo Africa.

Testigo supports local Masai tribespeople as they develop permaculture projects to supplement their traditional diet of meat and dairy with produce. Sawyer's organization trains Tanzanian schoolchildren and Masai women and men who have never grown food. Testigo provides small start-up resources to collect rainwater, plant medicinal and fruit trees, breed chickens, and grow vegetables for domestic use and to sell in local markets.

Sawyer ended the presentation by encouraging the audience members to follow their passions. Although it was a big change leaving her corporate job in Australia, she knew she was following her dream when she created Testigo.

During the question-and-answer period, Sawyer answered students' questions about the organization and her start in her new career. One student asked if Sawyer planned to expand her non-profit and she said, "Now that Testigo Africa has been active for ten years, I am ready to expand to other countries." Her presentation proved that one person can have an enormous impact, benefiting the lives of many people now and into the future.