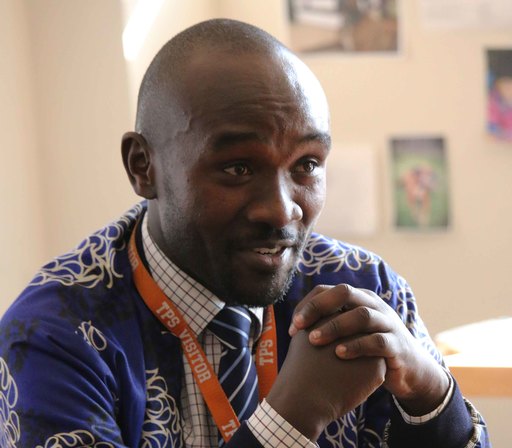 Refugee shares his story with students

Mwendabandu also met with Applied Science and Global Studies students on October 15 to describe his life as a refugee and his hopes and dreams for the future. During his presentation, he explained that he is from the Democratic Republic of Congo and currently living in the Dzaleka refugee camp in Malawi. Due to the violence in his home country, he found it necessary to leave and find a more peaceful home. He traveled to Tanzania before settling in the Malawian refugee camp. While at the camp, he founded Vijana Africa, a community-based organization focused on the promotion of gender equality and reduction of poverty and hunger. This organization promotes income-generating activities, such as rabbit farming and gardening, which Mwendabandu explained in some of Pennington's classes. Because of his efforts at the camp, Mwendabandu was awarded a Mandela Washington Fellowship and has spoken internationally about the refugee crisis.

After Mwendabandu gave a brief overview of the camp, several students asked additional questions about jobs at Dzaleka, the education system, and some challenges he faced. Through these answers, he explained that although the 40,000 refugees receive some assistance, it is not nearly enough. When he arrived, he was given a plot of land and a tent, but he had to build his house on his own. He created his own bricks and spent months creating his home. Mwendabandu also told students that there are 14,000 children residing at Dzaleka, but only 7,000 are able to go to school. Many parents created their own informal education system so their children can receive an education. In addition, refugees are not allowed to work, so almost all jobs are volunteer positions. To buy additional resources like sugar or cooking oil, refugees must learn some new skills or become their own entrepreneurs. For example, some students in school at the camp are taught photography and videography so they can then make videos of weddings, funerals, or special events.

A group of Pennington students will be traveling to Malawi in March 2020. They will use their developing STEM skills to bring technology and innovation to the children in the Dzaleka refugee camp. Pennington students are currently working on four different technology and design projects, and they will share their work while engaging in cultural and educational experiences with students in the Dzaleka schools.