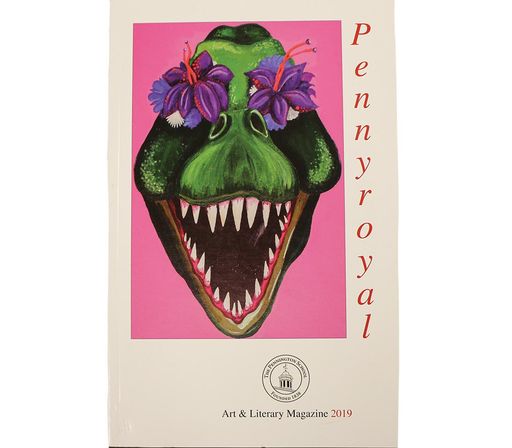 For the second year in a row, The Pennington School’s literary magazine, Pennyroyal, has received a “Superior” rating by the National Council of Teachers of English (NCTE)’s Recognizing Excellence in Art and Literary Magazines (REALM) Award contest.

Work on the literary magazine occurred during the 2018–19 school year: submissions were collected from October to March; formatting, designing, and editing the magazine took place from March until May; and the piece was sent to print in May 2019. Although the magazine does not have any thematic requirements, there are often commonalities among the pieces each year.

According to the NCTE website, “the REALM program publicly recognizes excellent literary magazines produced by students with the support of their teachers. REALM is designed to encourage all schools to develop literary magazines that celebrate the art and craft of writing.”

The student literary magazine contest was open to all secondary and middle schools throughout the United States, Canada, and Virgin Islands. Schools could submit only one issue to be judged, based on a point system. The total points awarded to the magazines determined placement in one of the following categories: REALM First Class (93–100), Superior (86–100 points), Excellent (71–85 points), or Merit (70 or fewer points).

In addition to receiving a certificate denoting their award, the names of the student editors, literary advisor, and the School appeared on the NCTE website.