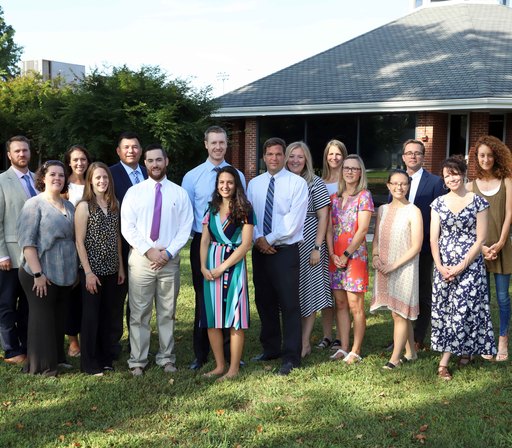 Stephanie Allen, born and raised in Langhorne, Pa., teaches Upper School mathematics and serves as an advisor to Odyssey of the Mind. A graduate of George School, she holds a bachelor's degree in mathematics from Rider University and taught previously in South Carolina public schools. She lives in Newtown, Pa.

Danielle Wright Bahr is teaching Middle School science as a leave replacement this semester. A native of Portland, Ore., she earned her bachelor's degree in biology at Duke University and her M.Ed. degree at Stanford University. After helping to open a charter school for low-income students and teaching biology in California, she eventually moved to Atlanta, Ga., where she taught elementary science education at Georgia State University and supervised student teachers. She lives in Princeton.

New York City native Rachel Gleicher Burke has joined the Upper School English Department faculty and will advise the School newspaper. She holds a bachelor's degree in international studies from Colby College and a master's degree in English literature from Middlebury College's Bread Loaf School of English. She taught English as a Second Language at a Brooklyn charter school before joining the faculty of Wyoming Seminary in Pennsylvania. For the last four years, she has taught English at the Wooster School in Danbury, Conn. She lives on the Pennington campus.

William Burke has returned to Pennington's Upper School English faculty; he taught at Pennington from 2008 through 2015, when he returned to his hometown of Houston to teach at St. Francis Episcopal School. A graduate of Wake Forest University, he went on to earn a Master of Arts degree from Middlebury College's Bread Loaf School, where he met his wife, Rachel; he later joined her on the faculty of the Wooster School in Danbury, Conn. He lives on the Pennington campus.

Stephanie Hanzel Cohen, who hails from Upper Darby, Pa., is teaching Upper School English. A graduate of George School, she earned a bachelor's degree in American literature from the University of California, Santa Cruz, and secondary English teaching certification from California State University at Northridge. She has taught levels from kindergarten to adults in California and New Jersey, most recently as an upper school English teacher at Wardlaw-Hartridge School in Edison. She lives in Lawrenceville.

Alexandra Crivelli, a 2010 graduate of The Pennington School, has returned to her alma mater to teach English as a Second Language and Mandarin Chinese. She earned her bachelor's degree from Hamilton College, majoring in Chinese language and literature. After a year with AmeriCorps in San Francisco and a year teaching fifth-graders in Brooklyn, she did graduate work at Middlebury College and the Middlebury Institute of International Studies, earning a Master of Arts degree in Chinese, with a focus on teaching Chinese as a second language. She taught Mandarin Chinese in the Hopewell Valley School District last year. She lives in Lambertville.

Elizabeth Python Cummings is assistant director of college guidance with the School's Cervone Center for Learning, helping students with learning disabilities through the college admission process. A graduate of Moravian College with a bachelor's degree in psychology, she earned a Master of Science in Education degree in mental health counseling from Fordham University shortly before beginning work in admissions at Iona College. Most recently she was director of placement at the Stephen Gaynor School, as school for students with language-based learning differences. She lives in Toms River.

Eli Durmer is teaching Upper School mathematics. Since earning his bachelor's degree in that field from Oberlin College in 2006, he has taught at independent schools in Arizona, Massachusetts, and Switzerland and most recently at Princeton Charter School. He is a graduate of Northfield Mount Hermon School in Massachusetts. He lives in Lawrenceville.

David Hallgren is the School chaplain and a teacher of religion. Originally from Washington state, he is Native American from the Yakama and Colville nations. His bachelor's degree from the University of Washington is in history, and he earned his master of divinity degree from Princeton Theological Seminary. He is an ordained Presbyterian pastor and served a congregation in Seattle before becoming associate pastor of Christian education at Pennington Presbyterian Church in 2012. He lives in Pennington.

Stacey Forget Inzer is teaching compensatory skills in the School's Cervone Center for Learning. She is a graduate of Providence College with a B.A. degree in elementary education and special education. After earning a master's degree in reading and literacy from Plymouth (N.H.) State University, she went on to attain Orton Gillingham certification in 2012. While living in Maine, New Hampshire, and Massachusetts, she has held positions as reading specialist, learning specialist, and teacher of English, among others, at various public and independent schools. She lives in Lawrenceville.

Chrissie Knight became head of Middle School at Pennington in July. After earning her B.A. degree in speech communication from Wake Forest University, she completed Master of Divinity studies at Princeton Theological Seminary. She served for five years as minister of youth and outreach at Trinity Church, Princeton. She joined Princeton Friends School in 2007 as schoolhouse manager; two years later, she became assistant head of school, the position she held for ten years before taking her current post at Pennington. Knight lives in Hopewell.

Matthew Mysliwiec is teaching Upper School chemistry and forensic science. A graduate of the University of Portland (Ore.) with a B.S. degree in biology, he went on to earn his Ph.D. degree in cellular and molecular biology from the University of Wisconsin. With extensive experience in scientific research as a postdoctoral fellow, he was a mentor to graduate and undergraduate students on laboratory techniques and research projects and has tutored high school and undergraduate students in biology and chemistry. Mysliwiec lives in Doylestown, Pa.

Andrea Popel, who grew up in Franklin Park and South Brunswick, teaches in the School's Cervone Center for Learning. She earned her undergraduate degree in communication and media at Saint Peter's University and post-baccalaureate teacher certification at Georgian Court University. After teaching at Princeton High School for two years, she moved to Maryland and taught in the Baltimore County Public School District for eleven years. Along the way she earned a master's degree in instructional technology, with an educational technology concentration, from Towson University. She lives on the Pennington campus.

Northeast Philadelphia native Peter Puleo is teaching Upper School mathematics. After earning his bachelor's degree from Saint Joseph's University, he did graduate work at Holy Family University, completing an M.Ed. degree in secondary education. He went on to study at Temple University, culminating in a Ph.D. degree in mathematics education. He has taught at the secondary and college levels, most recently at Holy Ghost Preparatory School.

Ryan Stokes is teaching Upper School health and wellness. A dual citizen of the United States and England, he was born and raised in Hamilton and graduated from The Hun School of Princeton. He went on to Immaculata University, where he earned his bachelor's degree in education and played Division III soccer. He went on to serve in various roles at Hun for four years before joining Pennington's residential faculty.

Nathaniel Van Yperen, the new chair of the Religion Department, comes to Pennington from Gustavus Adolphus College, where he taught courses in religion, race, and environmental studies. He is a graduate of Gordon College. Pursuing graduate work at Princeton Theological Seminary, he earned  Master of Divinity and Master of Theology degrees before completing his Ph.D. degree in religion in society. Van Yperen is the author of the forthcoming book Gratitude for the Wild: Christian Ethics in the Wilderness. He lives in Princeton.

Library assistant Emma Wells holds a bachelor's degree in English from Bryn Mawr College. She previously worked in marketing and communications and as a web content editor at George School and as a medical writer in the University of Pennsylvania's Department of Ophthalmology. Wells lives in Yardley, Pa.