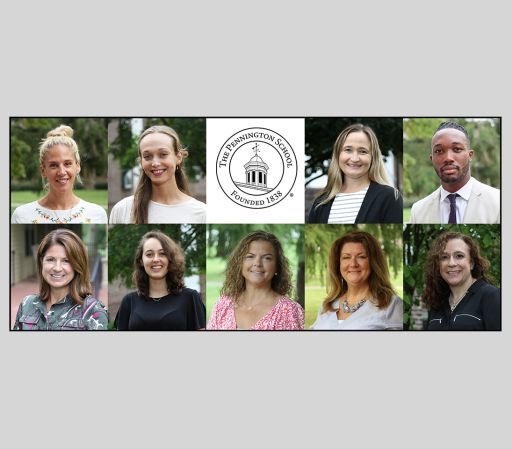 Julia Barrett is teaching Middle School history. A graduate of Boston College, Barrett majored in international studies with a minor in education. Barrett, who grew up in upstate New York, has also lived in Melbourne, Kenya, Washington D.C., South Africa, and Paris. She will teach seventh grade American History and Government, as well as Academic Skills. Barrett lives on the Pennington campus.

Tiernan Close is returning to teach history at The Pennington School, where she worked as a religion and world history teacher from 1998 to 2007. Close holds a B.A. in religious studies from Hartwick College, and an M.A. in biblical studies and a Ph.D. in global studies from Drew University. From 2009 to 2012, she taught at St. Matthew's Preschool in Pennington. While pursuing her doctorate at Drew University from 2014 to 2020, Close also co-taught in the graduate school, obtained a certification in conflict resolution and leadership, and served as the vice president of the Rangeley Lakes Historical Society in Maine. She lives in Pennington.

Hailing from Washington D.C., Delonte Egwuatu is teaching Spanish. Egwuatu earned a bachelor's degree from Morehouse College, and he began his career in the office of the Consulate General of Liberia. For the past three years, Egwuatu taught Spanish, English, and history at his alma mater, St. Andrew's Episcopal School in Maryland. He also co-founded an international education company, Black Beyond Borders, which endeavors to foster intercultural relationships through inspiring, equipping, and connecting young leaders throughout the African diaspora. Egwuatu lives on the Pennington campus.

Jennifer Helmrich joins the Health Center as the director of health services. She comes to Pennington with 22 years of pediatric nursing experience. Helmrich holds a bachelor's degree from Fairfield University and a master's degree from New York University. She started her career as a pediatric intensive care nurse, and she went on to work as an advanced practice nurse in a pediatric emergency department. Helmrich has also served as a pediatric nurse practitioner at the Children's Hospital of Philadelphia. Prior to coming to Pennington, she worked at Princeton Day School. Helmrich lives in Hopewell.

Anna Leader, who is teaching English and French, grew up in Luxembourg. After earning a bachelor's degree in comparative literature from Princeton University, she worked at an education nonprofit in Washington D.C. Leader has also written several award-winning novels, poems, and plays. She lives on the Pennington campus.

Dawn Nelson, born and raised in Mercer County, is teaching compensatory skills in the Cervone Center for Learning. She attended St. Joseph's University in Philadelphia, where she received her master's degree in education, as well as her certification to teach students with learning differences. For several years, Nelson taught at McGuire Air Force Base in Burlington County, N.J., and she has experience tutoring students of all ages. She lives in Yardley, Pa.

Shawn Nicosia, who teaches in the Cervone Center for Learning, is returning to The Pennington School, where she worked from 1994 to 2002 as a house parent, compensatory skills teacher, and counselor. Originally from upstate New York, Shawn earned her B.S. in education from the University of Delaware and her M.A. in counseling from The College of New Jersey. She has also worked at Lawrence Middle School as a math teacher. Nicosia lives in Doylestown, Pa.

New York City native Camille Osborne is the new administrative assistant to the dean of faculty and the dean of academic affairs. Osborne holds a B.A. in history from Iona College and an M.S.Ed. in elementary education from St. Joseph's University. Osborne has worked at the University of Pennsylvania and Bucks County Community College. Most recently, Osborne was the administrative coordinator of teacher education at Rutgers University's Graduate School of Education. She lives in Yardley, Pa.