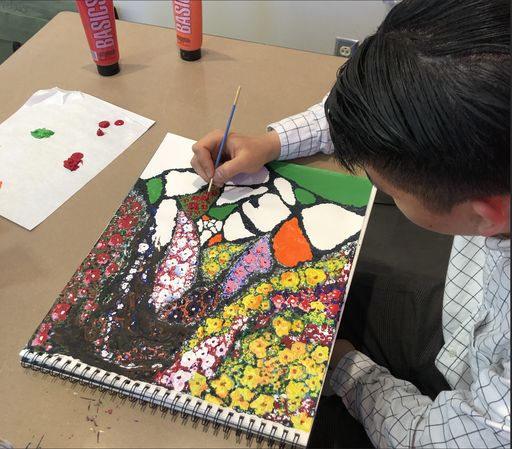 The College Board has selected artwork created by Chenglang (Steven) Tian '19 to be included in its 2019-2020 AP® Studio Art student exhibit. Nearly 66,000 student portfolios were submitted, and only thirty pieces were chosen to be displayed online on the College Board website and in person at ETS in Princeton. Tian's work was created in Pennington's AP Portfolio class. Tian started at Pennington in 2014 as an eighth-grade boarding student from China. At the beginning of that year, he quietly entered Caroline Hall's Middle School art class. As time progressed, Tian became vocal about his artistic goals.

During the summer between Tian's sophomore and junior years, he was a tour guide for Hall when she visited Beijing, China. During this time, they talked about his studying traditional Chinese methods.  Tian came back to Pennington that fall with a portfolio of work that was transformative. In his new work, he depicted himself as a butterfly through various stages of evolution within a number of environments. He continued to delve deeper into this series as a junior. Last year, in his senior year, Tian created work for the AP Portfolio class based on memories of his childhood.  The characters in the drawings were not intended to depict himself, but reflected moments he recalled and was facing.

Hall states, "His work ethic was impressive, working in the studio for hours—drawing, creating, internalizing, and externalizing his ideas. He is forever impressing me with his ideas and motivation to be his true self: an artist."

The Pennington School would like to congratulate Steven Tian on his accomplishment!