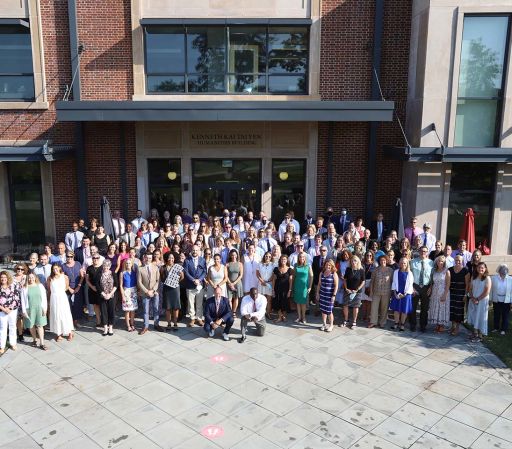 Michael Aponte will be serving as a maintenance mechanic. Aponte's career has been focused primarily on educational facility operations. Most recently, he was the facility supervisor for Newtown Friends School in Newtown, Pa. and CareOne Dementia Facility in Moorestown. Aponte lives in Delran.

Danielle Bahr is returning to Pennington to teach Middle School science as a leave replacement this semester. Bahr, who hails from Portland, Ore., earned her bachelor's degree in biology at Duke University and her M.Ed. degree at Stanford University. After helping to open a charter school for low-income students, Bahr moved to Atlanta, Ga., where she taught elementary science education at Georgia State University and supervised student teachers. Bahr spent a semester at The Pennington School in 2019, and then taught at Princeton Charter School. She lives in Princeton.

Alexander Gibbons is joining the Middle School faculty as an English teacher. After graduating from Fordham University, he worked briefly at an arts education summer program in Istanbul, Turkey, and then taught at a high school in Coney Island, Brooklyn. Gibbons lives in Pennington.

Gabrielle Gilmore will work in the Office of Advancement as the campaign manager. Gilmore holds a B.S. in nutritional science and psychology from Rutgers University. Prior to coming to Pennington, Gilmore was the special projects coordinator and the assistant to the assistant director of advancement at the Lawrenceville School. She lives in Lawrenceville.

Emily Kalkus started her career at Pennington in 2013, teaching physics. She took three years off to grow her family, and has now returned to Pennington to teach Upper School science and mathematics. She holds a B.S. and an M.A.Ed., both from Virginia Tech, and she lives in Pennington.

Joselle Lamoutte will teach Upper School Spanish. Lamoutte, who grew up in Puerto Rico, studied comparative literature at Princeton University. She spent a decade working as a language analyst at the Federal Bureau of Investigation doing both criminal and counterintelligence work. Lamoutte returned to Princeton University to complete the Program in Teacher Preparation, and she has worked at the Lawrenceville School for the past two years. She lives in Princeton.

Kristen Lopez-Watt is the director of leadership giving in the Office of Advancement. After earning her B.A. from the College of Wooster, Lopez-Watt worked in the investment industry. She then joined the development team at Stuart Country Day School. Lopez-Watt lives in Pennington.

Alexander Lyttle will join the Middle School faculty as a science teacher. An outdoor educator, Lyttle holds a B.S. in adventure education from Plymouth State University. Lyttle will live on the Pennington campus.

Daniel McKeown will serve as Pennington's lead security officer. He holds a B.A. and an M.A.S. from Fairleigh Dickinson University. McKeown has twenty-six years of law enforcement experience, with roles ranging from patrol officer to detective to patrol sergeant. Prior to Pennington, McKeown was a school safety officer for the South Hunterdon Regional School District.

Tatiana Nelson will teach Middle School US History and Government. Born and raised in New York City, Nelson graduated with honors from the Borough of Manhattan Community College and Hunter College. She earned her M.A. in Africana studies from the University of Pennsylvania, and she later worked at the non-profit Mid Bronx Early Childhood Center. Nelson lives on the Pennington campus.

Susan Schneider is the director of food services. Schneider is a longtime Sodexo employee, having spent twenty-five years at Blair Academy. She lives in Hillsborough.

Zuyi Wang joins the World Languages Department as a Mandarin and English Language Lab teacher. Born and raised in Beijing, Wang earned a B.Ed. from the University of Hong Kong and an M.S. from the University of Pennsylvania. After graduate school, Wang worked at The Knox School, a boarding school on Long Island, N.Y. She lives on the Pennington campus.

Carly Wassel will teach Upper School English as a leave replacement. She earned a B.A. from the University of Delaware, an M.A. from West Chester University, and a Ph.D. from Indiana University of Pennsylvania. After teaching at the college level for six years, Wassel left higher education to teach English at Garrison Forest School in Baltimore County. She lives in Newtown, Pa.

Kathleen Yates has joined Penninton's Health Center as the Director of Health Services. Yates grew up in South Jersey and graduated from Villanova University with a B.S.N. and M.S.N. in nursing. She has been practicing and educating future nurses for over twenty years. Prior to coming to Pennington, Yates worked as a professor at Villanova.

Sarah Zoll will serve as the associate director of college counseling. Zoll holds a M.A. in higher education administration from The George Washington University and a B.A. from Gettysburg College. Zoll was previously the New Jersey representative for Purdue University. She lives in Chesterfield.