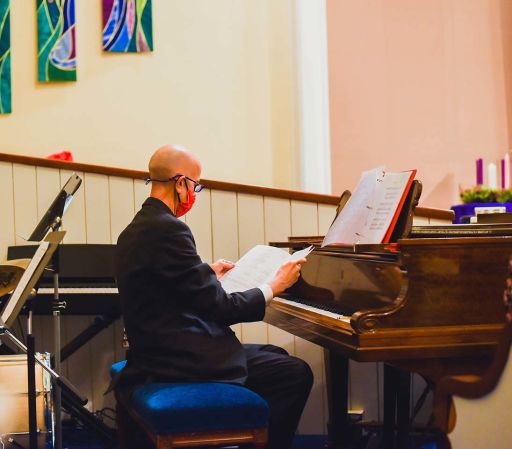 Jim Horan, teacher of music in Pennington's Arts department, has created several new opportunities for students to get more involved with vocal music. As the Pennington Singers grew in number and quality, he began to revisit the idea of creating specialty groups for students who demonstrated acumen, interest, and commitment to vocal performance. During the development process, the students' energy and ideas helped form the goals —and names—of the new groups. Both were created out of their passion for creative collaboration, desire for personal growth, and a plan for audience-ready performances.

The two groups that evolved:

SoundProof
In building a group steeped in the tradition of college a cappella and Glee/Pentatonix-type musical archetypes, the students developed the process, repertoire, and composition of voices. There are two to three slots available for each vocal range (soprano, alto, tenor, and bass), and all Pennington Singers are welcome to audition.

Undaunted by the social-distancing demands of the pandemic, SoundProof produced two recordings during 2020, both engineered virtually and through individual recordings on campus. Since returning to campus in September, they have performed a new version of Pennington's Alma Mater at Homecoming and two full arrangements at the November vocal concert. Plans for 2022 include a performance at the spring vocal concert, special "pop-up" offerings on campus, new recordings, and potential appearances at festivals and competitions.

The Treble Tones
The beautiful and eclectic voices in the Pennington Singers soprano and alto sections inspired the creation of this group in the fall of 2021. Membership is gender-inclusive and by audition. An elected student coordinator facilitates rehearsal schedules and wardrobe, and the group chooses repertoire from genres including classical, pop/rock, gospel, Broadway, and more.

Their debut mashup "All About Adele" was enthusiastically received by the audience at the November vocal concert. Plans for 2022 include an appearance at the spring vocal concert, on-campus coffee houses, and potentially recording and participating in festivals and competitions.